It’s usually quite challenging (but always fascinating) when a person visits The Archive and Local History Service armed with a specific enquiry. TV programmes like Who Do You Think You Are? Make it look easy – like the answer is neatly boxed away and all we have to do is don white gloves, open the lid and out it pops! The reality is very often quite different and offering any sort of answer might need hours of careful research.

Yet I felt differently when Gordon Hale visited the Search Room back in February this year; his enquiry gave me confidence, I felt sure I would be able to provide him with all he wanted to know in a flash just like TV land! This was because his enquiry contained the magic phrase ‘local author’ – of course I’d know, I work in a library, I love books, we have a Lancashire authors collection; we’re bound to stock books and store media articles and photos, just give me the name and I’ll bring it all out!

The next sentence had me stumped, ‘… his name is Donald Jack and he was born in Radcliffe…’ I looked at Gordon in dismay, I’d never heard of him. A quick check of the library catalogue and then the archives catalogue backed me up: we held nothing; knew nothing! I had to tell Gordon, ‘computer says no…’ Of course Gordon might be mistaken, I thought, was he sure that Donald Jack was from our Radcliffe? Might it be another Radcliffe somewhere else in the country or world even? Gordon was sure and he’d wanted to know more about Donald Jack ever since he’d discovered his ‘hilarious’ novels back in the 1960s. I better let Gordon tell you his story …

One lunchtime in 1964 I was sitting in the Drawing Office with a colleague, eating our sandwiches as we read. On the next board to me was Harry who was clearly enjoying his book as he was convulsed in laughter every few seconds. In the end I had to ask him what it was called and all he said was, ‘This is so good. You’ll have to read it yourself…I’ll pass it to you when I’ve finished it….’

The book was ‘Three Cheers for Me’ by Donald Jack, and, when I read it I found it to be special. Set in World War One (The Bandy Papers. Vol.1) is a fictional tale about one Bartholomew Bandy, the son of a Canadian vicar who with his regiment goes to France in 1916. He is unable to see himself as a funny, naïve, accident and confusion prone character that progresses by a series of what would be backward steps through a military and diplomatic career. The author is clearly a sensitive individual whose attention to details in describing war and those involved is evident and engrossing.

I bought a copy of the book, and then the second volume (That’s Me in the Middle), later adding a third ( It’s Me Again) which was spotted, to my total surprise, on a Church Christmas Fair stall. The fourth (Me Among the Ruins) was a well-thumbed copy from a friend.

The first volume described Donald Jack as Canadian, but, in the second he is English, settled in Toronto. He is well-known in Canada and USA, having won the Stephen Leacock Award for humour on more than one occasion. Then I read that he actually came from Radcliffe, Manchester in England. I live in Bolton but worked for Bury MBC from around 1970 and couldn’t find anyone who had even heard of Donald Jack.That was a surprise as Bury was justifiably proud of the achievements of Richmal Crompton (Just William stories) and Victoria Wood (Actor and Playwright).

My interest seemed to be justified, but, where to find out more…?

I felt that this itch really needed to be scratched; the tenuous and frustrating link from a few words at a workplace lunch at a drawing board in 1964, followed by steady curiosity to 2016 could soon be forgotten as I seemed to be the only person interested in what was fast becoming a wasted exercise.

Early in the New Year I paid a visit to the Archives in Bury hoping to find someone who would see this writer from Radcliffe as someone of whom we should be proud and was worthy of some recognition. I was introduced to Wendy Gradwell (Archives Assistant) and sat down to tell my story…. 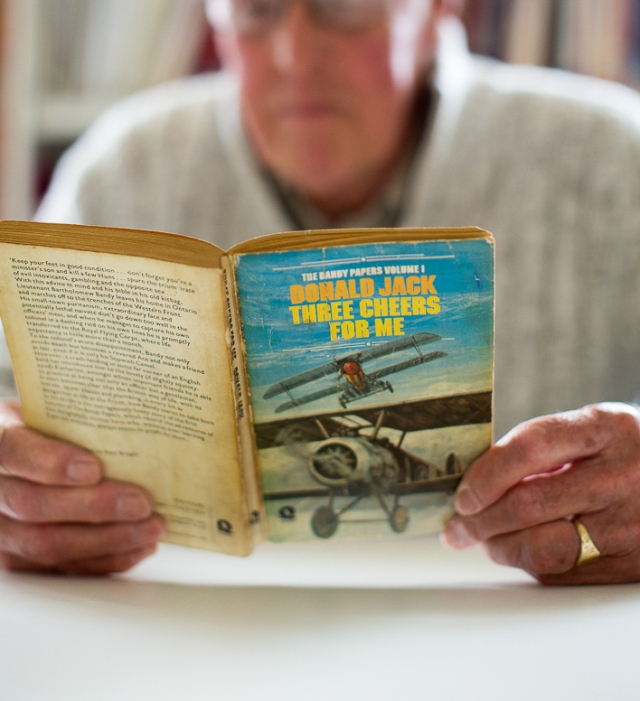 Gordon’s enthusiasm for Donald Jack’s novels was infectious and I promised him I would do all I could to find out more. With help from library assistant, Christine Moran, who has in depth knowledge of Ancestry, we were able to discover that Donald Jack left England for Canada on the 22nd November 1951. Further research on the internet took me to the University of Calgary in Canada where Donald Jack’s papers are housed. I contacted them immediately and was rewarded with a speedy reply from a member of staff from Archives and Special Collections named Allison, who happens to be a big fan of Donald Jack! Allison’s help has been invaluable and the articles and information she has provided, together with research carried out here at Bury Archives and Local Studies, have all helped to piece together a brief synopsis of his life: 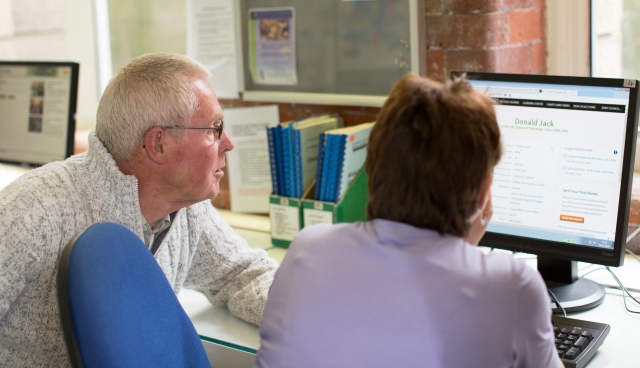 Christine Moran  and Gordon Hale carrying out research on Donald Jack through Ancestry.com

Donald Jack was born on the 6th December 1924 at Rock House, Stand Lane, Radcliffe. His father, Robert Jack, was a Doctor originally from Scotland and his mother Sarah Lamont had been a nurse in Canada. A search through our own archives reveals Robert holding the post of Medical Officer for Bury from 1936 – 1943.

Donald Jack was educated at Bury Grammar School and later Marr College in Troon, Scotland which gained him enough qualifications to study at London University. He served in the RAF from 1943 – 1947 and although it’s not clear what his next occupation was we do know he moved back home to Radcliffe as he appears in the 1948 electoral register for Radcliffe alongside his parents and also his sister, Marjorie. An obituary written for The Toronto Globe in 2003 suggests Donald Jack did make an attempt at writing but ‘thought he lacked talent’ and after his mother asked him in 1951, “Isn’t it about time you left home?” he emigrated to Canada.

In 1952 Donald Jack attended the Canadian Theatre School in Toronto and discovered that acting was definitely not one of his strong points! Another shot at writing produced his first professional work: a full length stage play, Minuet for Brass Band, which received glowing reviews. Another stage play followed and as a result of this success he took the post of script writer with Crawley Films Ltd, Ottawa. After writing numerous documentary film scripts for Crawley and various other film companies, he then became a freelance writer and by 1962 had written over 40 television and stage plays.

Donald Jack’s first novel, Three Cheers for Me, (known later as Volume 1 of The Bandy Papers) was published in 1963 and word of his success very soon reached his home town in Radcliffe! An article printed in the Radcliffe Times on June 14th 1963 shows real pride for a local boy whose writing style had been compared with P G Wodehouse and Kingsley Amis.

By the late 1980s, Donald Jack had published his eighth novel in The Bandy Papers series and had become three-time winner of Canada’s prestigious Stephen Leacock Memorial Medal for Humour. During the early years of the 1980s, Donald Jack and his wife, Nancy, made the journey back to England to be near their family. At the time of his death, in June 2003, Mr Jack was working on his ninth volume of The Bandy Papers. A report of his death was published in the Radcliffe Times on Thursday June 19th with the headline, ‘Prolific writer dies following a stroke’.

Having been introduced to Bartholomew Bandy through reading the first book in The Bandy Papers series, Three Cheers for Me, I can well understand Gordon’s quest to find out more about his creator, Donald Jack. It takes a certain kind of genius to create a character who appears so artlessly comic even when finding himself in the horror of the trenches and it’s wonderful to know that this same comic genius was born in Radcliffe. 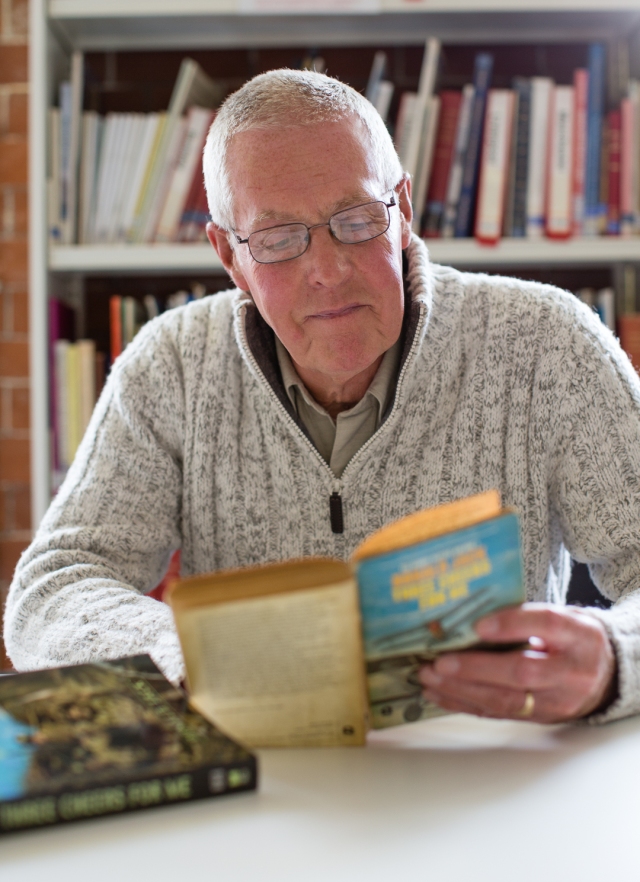 Gordon enjoying ‘Three Cheers for Me’ in the search room

Please watch this space for the announcement of an exciting new display featuring books, photographs and documents about Donald Jack – all available to view in our Archives search room!