Something Good from Bury

If you were to say the word ‘Bensons’ to a Buryite of a certain age, then firstly their eyes may mist over, soon to be followed by a little sigh as they fall into a chocolate-lime induced reverie.

For several decades and way before Gene Wilder brought Willy Wonka to life, Bury had its own ‘Chocolate Factory’ and the little chap with the toffee-shaped head became familiar to people all around the world as the face of Bensons Confectionery.

Thanks to the foresight of one lady, Gladys Ratcliffe, whose father Harry Hargreaves was one of the founders of the business that later became Bensons, we have a first-hand account of the history of this much-loved local company and its origins in the Walmersley area of Bury.   Gladys’s account tells us how Emanuel Pickles started a small confectionery business – Scott & Rose – in 1900.  This was based on Topping Street, near the bottom of Walmersley Road.  A couple of years later he was joined in the enterprise by Harry Hargreaves.  They began to make ‘Tower Sauce’, along with some jams and sweets.  Gladys recalls accompanying her father to Manchester’s Shudehill Market to buy the fruit.  The business grew and moved to larger premises in the old ‘Wolstenholmes’ factory on Huntley Mount Road, off Bell Lane. 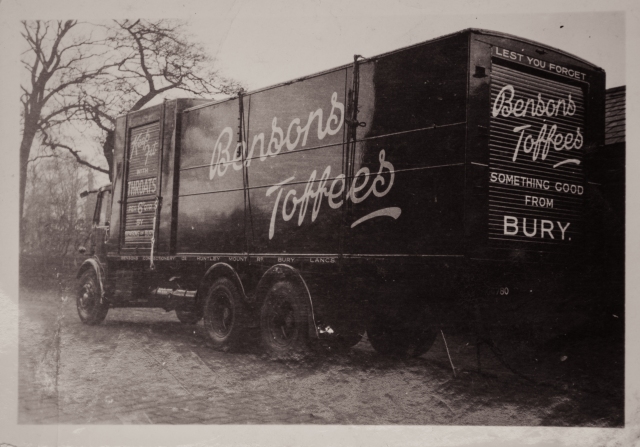 This heralded a new beginning as the sauce business was sold and the decision taken to concentrate on just the jams and sweets.  A new name was required as it was felt that ‘Pickles & Hargreaves’ did not fit the bill!  Out of the hat came ‘Bensons’ and a whole new era dawned.  Harry Hargreaves came up with the slogan ‘something good from Bury’ and his son, Clifford, designed the little ‘Bensons man’ figure that appeared on their distinctive tins, packaging and advertising.

Business continued during World War I, although by now the company had jettisoned the jam in order to focus on confectionery.  Bensons was always very much a family business and in 1921 Harry’s son Alan joined the firm.  In 1937 Alan was joined by his brother Clifford but being a highly qualified engineer he was called up during World War II.   Bensons continued during the war, having been nominated to produce goods for other firms, who would then add their own labels.   They continued to trade post-war, although by now they faced stiff competition from other brands.  Clifford, now back from designing Lancaster Bombers, became Sales Director and travelled overseas to investigate potential new markets. 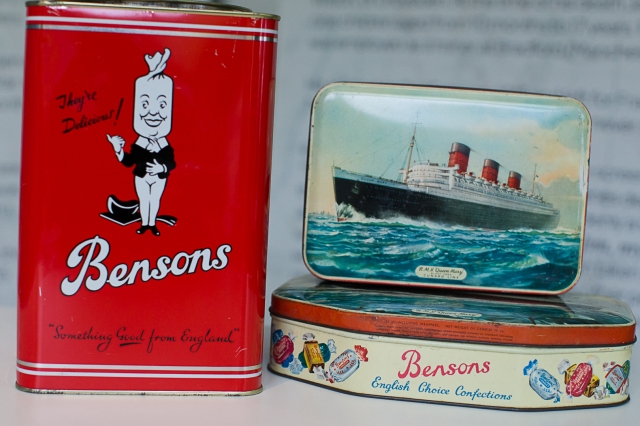 In 1960 Bensons merged with the Liverpool-based firm Barker & Dobson, and later merged again, this time with the makers of Victory V’s, Nelsons.  Production continued until the late 1980s when Alma Scotland (whose brands included Squirrel and Keillers) took over.  In 1988 the decision was taken to cease manufacturing and Bensons closed its doors in June 1989.  The factory was demolished and in the early 1990s Aldi opened one of their first supermarkets in the area on the site, which still flourishes today. 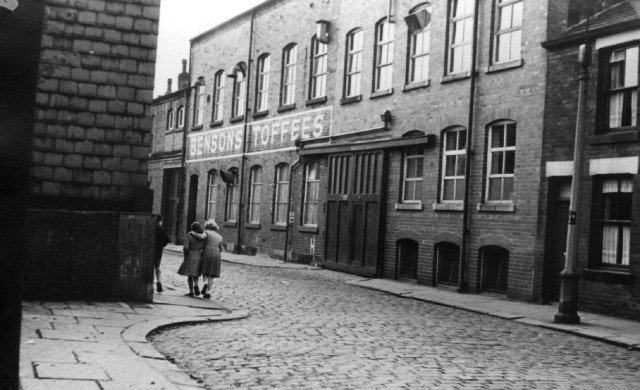 Throughout the 1960s and 70s,  the white paper bags overflowing with sweets and toffees of different colours and flavours were a familiar feature of local households and as a small child I can recall a lovely liquorice aroma filled the air when the wind was blowing in a particular direction.

Many thanks to the Hargreaves family for very kindly bringing in these splendid Benson’s tins and photographs to share with us, some of which are currently on display in our Searchroom, so come along and help yourself to some real toffees and be transported back in time…

Did you work at Benson’s?  Which sweet was your favourite?  …and what was Tower Sauce?

We would love to hear from you!

13 Responses to Something Good from Bury